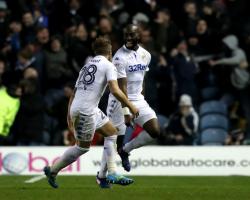 The two second-half goals teed up a 2-0 win and condemned managerless Forest - who defied their hosts well for 45 minutes - to a 14th league loss of the season.

Garry Monk's Leeds will worry little about that and the chances are that come Sunday's FA Cup tie with Sutton, they will still be talking about Doukara's goal.

Often maligned during his time in Yorkshire, the Frenchman evoked memories of Tony Yeboah with a thunderous first-time volley at Elland Road, not too dissimilar to Yeboah's wonder goal against Liverpool 21 years ago.

Keen to atone for their loss to Barnsley at the weekend, Leeds flew out of the blocks and could have led within 12 seconds, Stuart Dallas off balance and off target on the end of Kemar Roofe's cross.

Buoyed by their morale-boosting weekend over Bristol City at the weekend, Forest replied with Britt Assombalonga drawing a terrific fingertip save from Rob Green.

Leeds' goal threat comes largely in the shape of Wood and the New Zealander thought he had his milestone strike 13 minutes in, but he was called offside as he crashed in a loose ball from a free-kick.

Chances thinned out for the rest of the half, though, with Forest's resolute backline frustrating the home side.

The home crowd, knowing what was at stake, did their best to lift United and the goal they craved arrived 55 minutes in.

Kyle Bartley's header from a Pablo Hernandez corner was blocked - possibly by hand - but before Leeds could protest the ball had fallen to Wood and he finished emphatically from six yards.

Forest - with Assombalonga isolated despite the introduction of Nicklas Bendtner from the bench - were unable to offer a response and as they laboured, Doukara finished the job in the 74th minute.

On for Dallas, he was positioned outside the area as Michael Mancienne half-cleared Hernandez's corner, and arrowed a volley past Stephen Henderson into the top-left corner that had to be seen to be believed.

Roofe tried to join him on the scoreboard with another volley, his skipping inches wide as Leeds enjoyed themselves, but in the end two was enough.