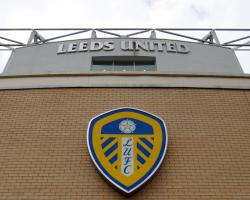 The Italian businessman, who co-founded sports media rights company MP & Silva, this month acquired a 50 per cent stake in the club from compatriot Massimo Cellino through his company, Aser Group Holding.

Radrizzani was coy on a reported agreement to buy out Cellino's remaining holding in the summer but did reveal his intention to purchase and improve the club's stadium, which is owned by Manchester businessman Jacob Adler.

"It's an important topic," said Radrizzani

"Elland Road is an iconic venue, not only for Leeds but for English football

"All fans are very loyal to this stadium so it's one of my priorities to evaluate the option to exercise the opportunity to buy back the stadium.

"I'm not promising this but I promise I will evaluate very carefully in the new few months the business case to buy it back.

"But we also need to analyse what is required to make it a little bit more modern."

Radrizzani has invested in Leeds at a time when the club are vying for promotion from the Sky Bet Championship in Garry Monk's first season in charge.

Monk is only on a one-year rolling contract but Radrizzani was relaxed about the managerial situation.

"It's not a big issue because we are in frequent conversation - myself, Massimo and Garry - and all three parties have the intention to stay together," Radrizzani said.

"Sooner or later we will sit down

But at the moment, everyone is just focused on the day-to-day work.

"I'm very confident we will fix this."

Radrizzani got his first taste of Elland Road as co-owner on Friday night as Leeds beat promotion rivals Derby 1-0.

"It was really exciting and very special and emotional for me," said the 42-year-old.

"I couldn't have asked for a better experience

We played a fantastic first half, the crowd was great, we won and it was intense until the last seconds."

Radrizzani could find himself in full control of the club in February if Cellino's ban for breaking the Football Association's agent regulations is enforced.

Cellino has been involved in a number of high-profile controversies since he took over Leeds in 2014, but Radrizzani has called on the club's fans to focus their energies on on-field matters.

"I'm new here so I cannot judge the past and what he has done," said Radrizzani.

"But from the time I've known him I have found him to be passionate about football and this club.

"So far he seems very passionate and motivated to bring results.

"Things are going well this year so I hope the fans complain a little bit less and sustain the support for the players because they are doing a great job."

Cellino admitted it was the perfect time to share the responsibilities of running a club that is still recovering from past financial problems.

"Since we started talking a few months ago we started winning and thought he brought good luck," said Cellino.

"It was the right time to take someone on board, someone who comes from my own country.

It takes a lot of money to fix this club

Andrea has a longer future than Leeds have with me.

"I feel, especially last night, the team looks like a team, not a bunch of players anymore.

"We had some players missing against Derby and I'm really proud of the performance.

"Garry is doing a good job

We hope it goes well to the end of the season."