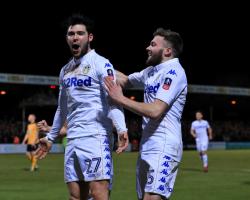 Garry Monk's side were second best throughout the first period and trailed at the interval through Uche Ikpeazu's goal, but hit back in the second half with two goals in eight minutes.

They now go on to face lower league opposition again, having drawn Sutton United or AFC Wimbledon away in the fourth round.

Cambridge looked to attack from the start, with their forward partnership causing the Leeds back line problems with their relentless movement as 15-goal midfielder Luke Berry supported lone forward Ikpeazu.

After Leeds went close through Marcus Antonsson, whose cross landed on the top of Will Norris' crossbar, Berry pounced on a stray pass and spread the ball to Ikpeazu, who forced Marco Silvestri into a low save

Berry then hit an adventurous free-kick only narrowly wide from 35 yards.

Ikpeazu troubled Leeds with his presence with his back to goal, resulting in a booking for Kalvin Phillips after taking the ball past him, and soon made his mark in the penalty box with the opening goal after 25 minutes.

Another Berry free-kick was blocked before falling to Ikpeazu in the area, with the forward turning his man and firing low beyond Silvestri at his near post with a finish that glanced the post on its way in.

Leeds looked rattled by Cambridge's tempo, though they were nearly level five minutes before the break, with Alex Mowatt finding space to crash an effort from long range which was heading in before being tipped over by Norris

From the resulting corner, Norris produced a super reaction stop to keep out Liam Cooper's header.

Cambridge did not initially look to sit on their lead after half-time, but Leeds hit back on 56 minutes and went on to take control of the game.

Mowatt provided a fine deep cross from the left which was met by a towering header from Stuart Dallas which left Norris with little chance.

Cambridge's first-half exertions caught up with them as they looked in vain for an equaliser, failing to match the tempo of earlier in the night

Initially it was Leeds who looked most likely to add to the score as Mowatt fired through the legs of Norris and wide from an improbable angle.

The home side did still threaten, with Ikpeazu flicking a Max Clark corner wide before Silvestri spilled a low Mingoia effort into a dangerous position, but the visitors were able to clear the final piece of danger.