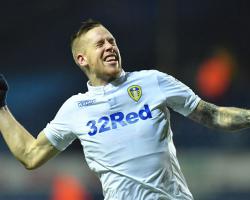 The accolade, voted for by fans, comes after a fine December for the Swedish centre back who is currently on loan from Italian side Torino

Featuring in all six of Leeds games throughout December, Jansson contributed to four wins and a draw, managing three clean sheets in the process

The six-foot-five defender also managed a goal against Championship rivals Aston Villa, and an assist in Leeds thrashing of Preston North End.

Jansson began his senior career at Swedish big guns Malmo, making 98 appearances for the side winning the Allsvenskan three times in the process

In 2014, the 25-year-old moved to pastures new and signed for Serie A side Torino, making 16 appearances before going on loan to Leeds in 2016.

Already a fan favourite at Elland Road, Jansson looks to be moving closer to a permanent deal, and has thanked Leeds for believing in him:

Leeds will for sure be a part of me for the rest of my life."

Voting is now open for the Sky Bet League One PFA Fans' Player of the Month for December.