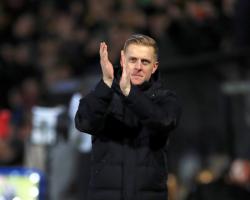 Leeds' brilliant form since October hit a wall when they lost at Barnsley, but struggling Forest were swept aside as Monk's men made it six home clean sheets and victories in a row.

After a sterile first half of few chances, United seized the initiative after the restart and secured a 2-0 win thanks to Chris Wood's 20th of the season and Souleymane Doukara's incredible volley.

Doukara's 20-yard thunderbolt was typical of Leeds under Monk; a player previously maligned playing with a freedom seldom seen before.

"It was a fantastic strike, you won't see too many cleaner or better ones this season," Monk said.

We felt it would be important, when we spoke in pre-season, to bounce back from negatives, show we could recover.

"It was a difficult first half, their game plan was working

It ended up a mucky game, stale

We made a few tweaks, upped our intensity and we win games when we do that.

"To show we can bounce back, that was the main thing."

Doukara's goal ensured that Wood's 20th of the campaign was a mere afterthought.

However, given the New Zealander was booed off in August and felt moved to celebrate a goal in the next game with a cupped ear to the crowd, his turnaround is an emphatic one.

"It's a fantastic achievement," Monk said.

"Strikers love goals, to score 20 at this point is fantastic but I'm not interested in who scored the goals

He knows that himself, his job is to want more and to push for more

He's a leader and he knows what I expect of him."

On Wood's turnaround in fortunes, Monk added: "I trust all my players

I believe in them

The key is to find their trigger, their motivation and they buy into what we want them to do

Chris is a perfect example of that

Credit to him, but it's now about wanting more."

With no permanent manager in place and under-fire owner Fawaz Al Hasawi saying plans to sell the club have been shelved, confusion reigns at the City Ground.

"I was very pleased with our performance," caretaker boss Gary Brazil said.

"I thought in the first half our use of the ball was very good and we had to take our chances.

"No complaints about the first half

The second, we came off the tempo and I think that's where we are at the moment."