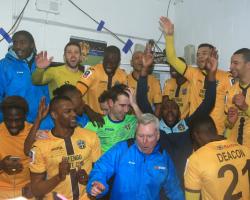 Non-league duo Sutton and Lincoln made history by both reaching the last 16, while Liverpool were the major casualties.

THE COMPETITION IS ALIVE

To pretend one exciting weekend means all is rosy in the FA Cup garden would be wrong, and the number of Premier League and Championship clubs fielding weakened teams was a major disappointment

But, when it comes to drama, the cup runneth over

Top billing has to go to Sutton and Lincoln, with the former writing another chapter in their remarkable story in the competition

Wycombe, meanwhile, narrowly failed to topple Tottenham but their last-gasp 4-3 defeat was a cup classic.

IF AT FIRST YOU DON'T SUCCEED

In 1989 they were at it again, pulling off one of the most famous results in FA Cup history by beating Coventry

But the fourth round again proved beyond them, this time Norwich winning 8-0

Twenty-eight years later, by a quirk of FA Cup fate, Sutton found themselves drawn against Leeds once more after defeating AFC Wimbledon

And Jamie Collins' penalty won it for the non-leaguers.

DANNY WELBECK CAN BE IMPORTANT FOR ARSENAL

If any player deserves a break, it is Danny Welbeck

Over the past two seasons, Welbeck has made just 19 appearances

Prior to being named in the starting line-up against Southampton on Saturday, he had played only a handful of minutes this season, but it did not show as he scored twice and put in an excellent performance for 65 minutes

If the 26-year-old can stay fit, he can offer both Arsenal and England a valuable option.

In the forward's absence, the Reds have won just one of seven games - an FA Cup third-round replay against Plymouth - exited both domestic cup competitions and slipped 10 points behind Chelsea in the Premier League title race

Mane's pace and penetration have been badly missed and, if he is available to face Chelsea on Tuesday, that will be a much-needed boost.

THE BIG GUNS ARE STILL FAVOURITES

For all the shocks, the chances of an outsider winning the competition still look remote

Only seven of the last 16 are Premier League teams - Leicester could join them after a replay against Derby - but Manchester United, Manchester City, Chelsea, Arsenal and Tottenham are all still in the hat

Since 1995, only Portsmouth and Wigan have broken the dominance of the big teams and the odds are stacked against the rest once again.