Cellino Open To A Joint Purchase 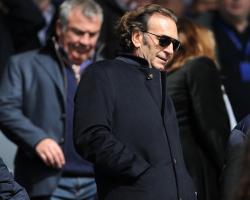 Cellino is waiting to learn the outcome of his appeal against the Football League's decision to block his £25million takeover.

But in an unexpected twist, the Italian has opted to join forces with Together Leeds, a Yorkshire-based group headed by former Manchester United International director Mike Farnan.

A judge in London has still to decide whether to uphold the League's decision to disqualify Cellino from becoming club owner after the businessman was convicted of tax evasion in Sardinia.

Cellino's company, Eleonora Sport, and current Leeds owner Gulf Finance House Capital exchanged contracts on February 7 on a deal that would see the Cagliari owner buy 75 per cent of the club's shares.

Together Leeds, which includes former Leeds director Adam Pearson, Welcome to Yorkshire chief executive Gary Verity, Red Strike marketing executive Frank Devoy and another unnamed member, had a bid to buy the club turned down by GFH Capital in November.

GFH Capital has since refused to engage with Together Leeds, but the Farnan-led group have not gone away and this week moved to work alongside Cellino in a bid to prevent the club from sliding into administration.

"We've been in discussion for the last 48 hours, myself and Frank and Massimo's representatives, both in Italy and the UK," Farnan told Press Association Sport.

"We took the decision on Monday that we needed to make the move to ensure the safety and the future of the club and that pointed to an approach to reach Massimo.

"There was already a bit of a link. I know one of Massimo's close associates in Italy very well and it was a combination of both us and Massimo being keen to reach out. He wanted to listen to us.

"The two parties working together does not necessarily hinge on the outcome of the appeal.

"Both parties are open to exploring all avenues, all aspects of how and why we should work together to resolve the current situation.

"It's an opportunity to take the club forward. We, Together Leeds, recently had our own meeting and our biggest, our single, concern was that this club cannot go into administration.

"Together Leeds is about trying to engage with the owners and Massimo to do what's best for the club.

"You'll always get vultures won't you?

"Together Leeds has grave concerns that the club could find itself in administration and from our point of view that is a non-starter."

It is understood that Cellino's share purchase agreement with GFH Capital gives him and his company, Eleonora Sport, the right to decide who to sell his 75 per cent stake to if his own takeover bid fails.

Together Leeds is hoping to use that clause as a way in to Elland Road if Cellino's recent tax conviction for failing to pay import tax on a yacht contravenes the Football League's owners and directors test.