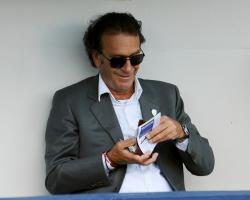 A Professional Conduct Committee (PCC) chaired by Tim Kerr QC rejected the appeal after deciding his tax evasion conviction in Italy was an offence of dishonesty.

Cellino will now have to step down as a director, cut ties with Leeds and undertake not to have any significant influence over the club until April 10 when his conviction becomes spent under UK law.

In its judgement, dismissing Cellino's appeal against the Football League's decision to disqualify him, the PCC stated: "We consider that the judge's findings of fact and her description of Mr Cellino's state of mind based on them, is of conduct which would reasonably be considered to be dishonest.

"We therefore conclude that Mr Cellino has been convicted of an offence involving a 'Dishonest Act' within the meaning of the rules, and that he is accordingly subject to a 'Disqualifying Condition'.

"As a result of this decision, Massimo Cellino is disqualified from acting as a 'Relevant Person', as defined by Football League regulations until 10th April 2015."

Cellino and Leeds will also face a further misconduct charge for failing to supply the Italian court judgment to the Football League when it first became available.

"This will be heard by a Football Disciplinary Commission in line with League regulations in due course," said the Football League.

The league also said it will provide any assistance requested by Leeds to help it minimise the effect on Cellino's disqualification.

A Football League spokesman said: "The Football League's sole objective throughout this process has been to ensure that our regulations, as democratically approved by our member clubs, are complied with.

"These regulations uphold principles relating to club ownership that are widely recognised to be in the interests of the game and have the support of the other football authorities, the Government and football supporters generally."