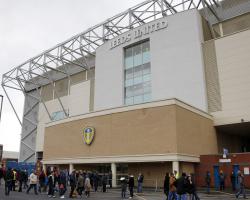 Eleonora Sport, a company owned by the Cellino family, has purchased the stake subject to Football League approval.

Cellino's relationship with Leeds has already been a stormy one, with representatives of the Italian having dismissed manager Brian McDermott before the club reinstated him.

His credentials will be examined by the Football League's 'owners and directors test' before the deal, which was confirmed on the Leeds website, can be fully ratified.

The 57-year-old agricultural entrepreneur has twice been convicted of fraud and is awaiting trial for allegations of embezzlement - a charge he denies.

If the deal goes through, Nooruddin will continue to be the club's chairman, while David Haigh will be the chief executive.

A statement from Nooruddin on the club's official website said: "I am delighted to announce that we have exchanged contracts for the sale of 75 per cent of the club to Eleonora Sport Ltd, subject to Football League approval.

I will remain the club chairman and David Haigh will be the club CEO.

"The board has always had as its principal aim the creation of a long-term ownership structure through partnership with sound and strategic investors to build on the foundations we have laid for sustainable success for this great club.

"We believe we will have achieved that with this deal

It provides the basis from which Leeds United can move forward to a position which will enable it once again to compete at the highest levels of football."

The statement from Leeds continued: "That is where this great club belongs and it is nothing less than its fans deserve

Throughout the difficult years, as well as the glory years, they have remained second to none in their support of the club and we as a board have always appreciated their passion.

"Following the introduction of GFH to the Cellino family which owns Eleonora Sport Limited it quickly became apparent that the family and the company offered both the long-term investment and the footballing knowledge necessary to take their place as majority owners of Leeds United FC.

"Everyone on the board is looking forward to working with our new partners who we hope will be in place at Elland Road very soon."

The Football League announced earlier today that it cannot make progress with Cellino's bid as it has yet to receive ''all of the information it has requested for the relevant parties''.

The League also said that the signing, apparently at Cellino's behest, of Italian Andrea Tabanelli could not be approved because it did not comply with its regulations.

Cellino became the frontrunner to buy Leeds when a consortium made up of club managing director and GFH Capital executive David Haigh and principle sponsor Andrew Flowers collapsed on January 30.

Having already installed long-term friend Gianluca Festa, the former Middlesbrough defender, at the club's training ground with a view to him replacing McDermott, Cellino then sacked the former Reading manager via a lawyer.

Flowers then said his company, Enterprise Insurance, would be joining Flamingo Land in reviewing its sponsorship of the club in protest, before McDermott was reinstated after missing last Saturday's 5-1 win over Huddersfield, with his sacking deemed as invalid.

McDermott's assistant, Nigel Gibbs, led the team for that match along with academy coach Neil Redfearn, having initially been told that Festa would be in charge.

It was then understood that Flowers had combined with another consortium, Together Leeds, which is headed up by former Manchester United director Mike Farnan, in a bid to topple Cellino's bid.

He threw in the towel on Tuesday, though, and has served the club with a winding-up petition relating to alleged debts from money he loaned the club in 2012

That is due to be heard in March.

Farnan insisted that his consortium remained keen on purchasing the club but said contact with GFH had been hard to come by, and its hopes appear to have faded further now that a deal with Eleonora has been announced.

In amongst it all, Tabanelli's presence at the club's Thorp Arch training ground has summed up the often slapstick nature of the chain of events

The 23-year-old midfielder arrived at Leeds on deadline day after McDermott and captain Ross McCormack were told to expect a number of other Italian signings.

The Cagliari player would be the only arrival, though, with Cellino unable to find anyone at the club who could authorise any more arrivals.