10 men Whites defeated on the road. 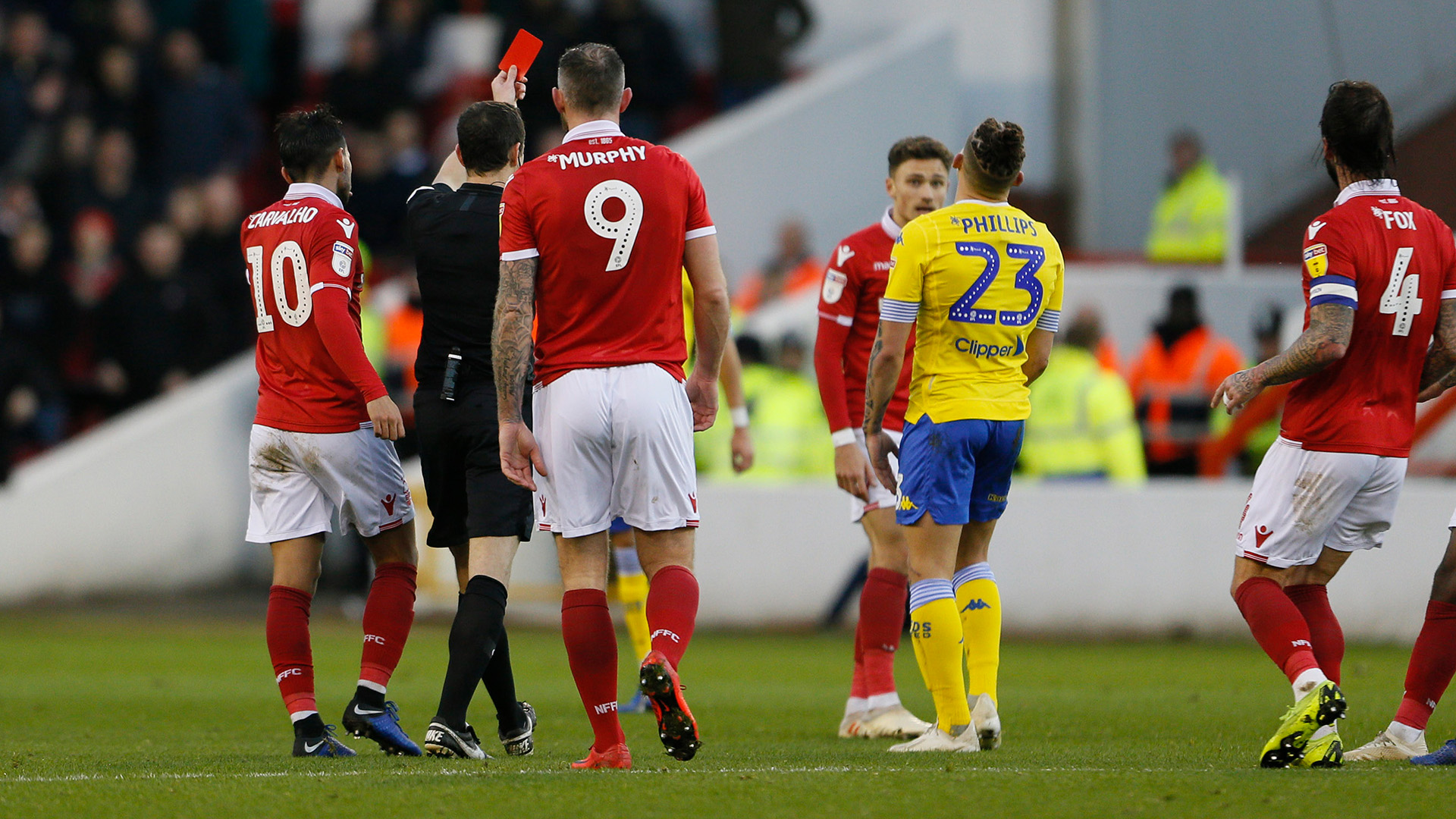 Leeds United suffered a fifth league defeat of the season as Nottingham Forest ran out 4-2 winners at the City Ground, with the Whites having to play the second half with 10 men following Kalvin Phillips’ dismissal.

The hosts took the lead less than a minute later.  An Adam Forshaw back pass didn’t have enough weight on it and Jack Colback went in on goal and rounded Bailey Peacock-Farrell before slotting home.

Claudio Yacob headed just wide from a Forest corner, before there was controversy.  Douglas played Jack Harrison on goal and he was brought down on the edge of the box by Jack Robinson who was the last man, however he got away with just a yellow card.  From the resulting free-kick Douglas fired just inches off target.

Alioski went close with a header which went just over and Harrison played Kemar Roofe in on goal, but he couldn’t get the better of Costel Pantilimon as Leeds pushed to get level.

The Whites then went close from a Douglas corner, Alioski headed at the near post, but saw his effort cleared off the line for a corner with Roofe lurking.

With three minutes of the first half remaining, Leeds were dealt a further blow when Phillips was shown a red card for a late challenge on Adlene Guedioura.

Forest almost extended the lead before the break when a Forshaw pass was intercepted and Joe Lolley went through on goal, but Peacock-Farrell made an outstanding stop. 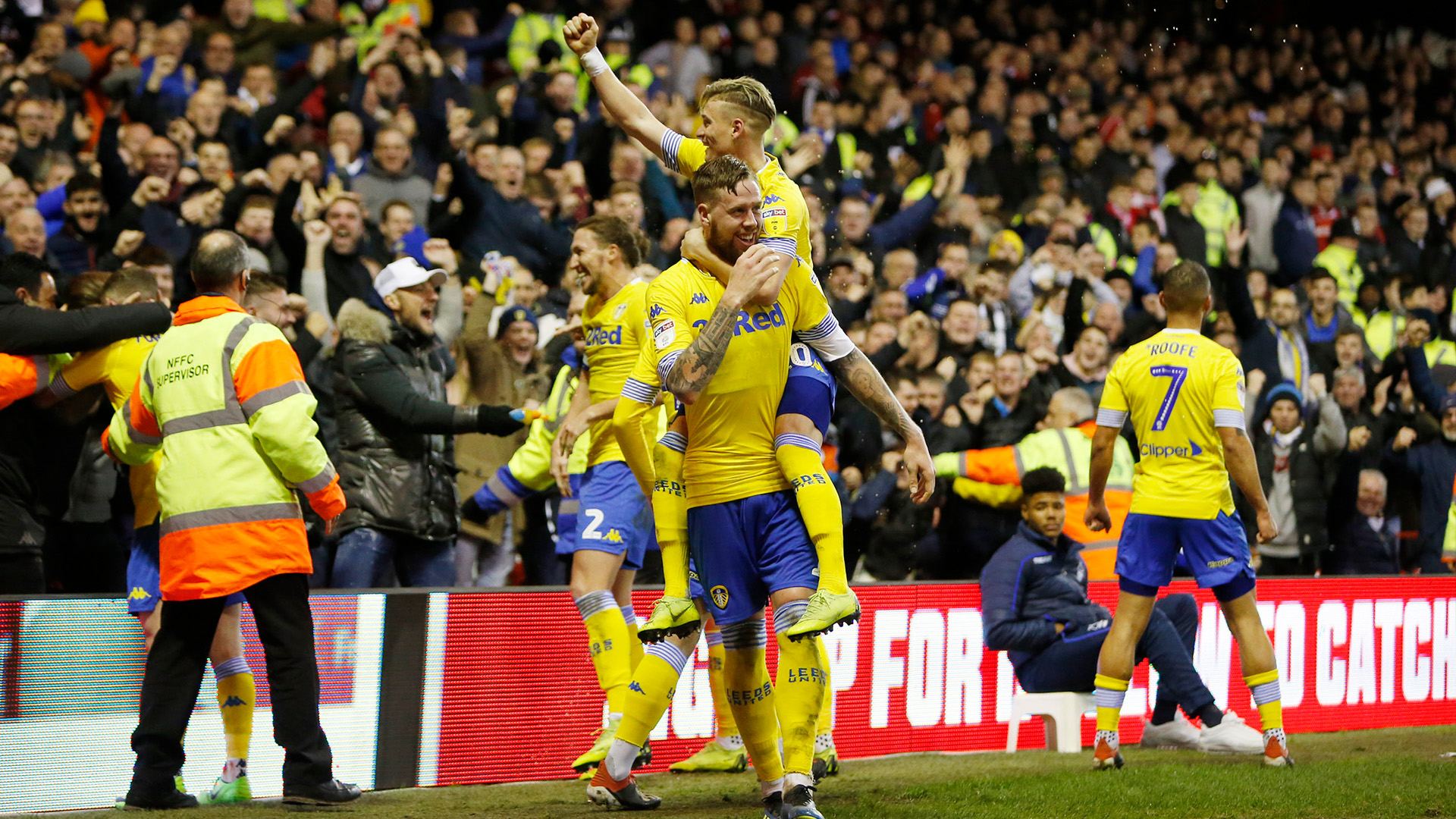 Leeds made one change at the break with Jack Clarke introduced for Harrison and it was the Whites who had the first chance of the second period.  Following some good build up play Roofe teed up Hernandez to strike from the edge of the box, but he was denied by a good save from Pantilimon.

The Whites then levelled the scores through Clarke, he was teed up in the area by Mateusz Klich and managed to squeeze the ball beyond Pantilimon into the back of the net.

Leeds almost took the lead just after the hour mark, Roofe latched onto a ball over the top of the defence and attempted to lob Pantilimon, with his effort going just wide.

The Whites did go ahead though in the 64th minute though following a corner.  The ball came out to Hernandez, he found Pontus Jansson who headed across goal and Alioski smashed in a volley from close range.

The Leeds lead lasted less than five minutes though when a Nottingham Forest corner fell to Colback who fired home his second of the afternoon.

Clarke almost restored Leeds’ advantage soon after though.  He fired a curling effort from the edge of the box which went just wide.

However it was the home side who went in front in the 72nd minute, when Murphy headed home a corner.

Forest sealed the win with 13 minutes of regular time remaining, when Murphy beat the offside trap and teed up substitute Ben Osborn, who found the top corner.

Leeds had chances late on when Roofe was played through on goal, but couldn’t beat Pantilimon and the striker also headed just over in stoppage time, but despite the result, the Whites remain at the top of the division.