Phillips celebrated his contract extension with a first-half brace as Leeds United got new head coach Thomas Christiansen's reign off to a winning start with a 3-2 victory at newly-promoted Bolton. 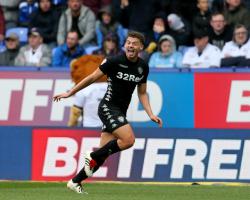 The 21-year-old homegrown midfielder, who this week penned a deal extending his stay at Elland Road until 2021, opened the scoring early on and struck again before half-time to give Leeds a 3-1 interval lead.

Chris Wood, who scored 30 goals last season, made it 2-0 after Phillips' opener but Gary Madine pulled a goal back for the Trotters before Phillips' second restored Leeds' two-goal advantage.

A second-half penalty from Adam Le Fondre was reward for Bolton's spirited display after the break but Leeds held on to take the spoils in an entertaining clash at a rain-soaked Macron Stadium.

New Leeds head coach Christiansen has made a raft of new signings and included three debutants in his starting line-up.

But it was homegrown product Phillips who opened the scoring in the seventh minute with superb right-footed deflected shot.

Pablo Hernandez won a corner and - from his delivery on the right flank - Phillips connected sweetly with a powerful strike which flew past Mark Howard and into the far corner.

Bolton posed a threat from set-pieces but struggled to create clear-cut goalscoring opportunities.

Leeds then grabbed a second goal on the half-hour mark when Kemar Roofe delivered a deep cross from the right flank and Alioski headed the ball back across goal to Wood, who nodded past Howard via the underside of the crossbar.

Leeds lost left-back Gaetano Berardi to dislocated shoulder and he was carried off on a stretcher in the 36th minute and replaced by new recruit Vernon Anita.

Bolton hit back three minutes later when Madine capitalised on uncertainty from Wiedwald by heading home a deep inswinging corner by Josh Vela.

But Leeds had their third in the 42nd minute when Wood broke the offside trap from Hernandez's pass and squared the ball to Phillips, who fired into an empty net.

Alioski almost added a fourth in added time at the end of the first half when he blazed wide from Roofe's dangerous right-wing cross.

Bolton captain David Wheater was replaced by Reece Burke in the 52nd minute and Leeds also lost the impressive Pennington to injury in the 64th minute.

The Everton youngster was replaced by Conor Shaughnessy, who soon conceded a penalty in the 67th minute when he pulled Madine's shirt and Le Fondre smashed the ball home from the spot.

Hernandez then hit the bar with a superb 20-yard strike moments later as Leeds held on for victory, while Bolton had Vela carried off on a stretcher late on.