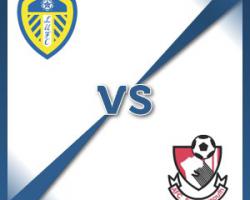 Leeds defender Gaetano Berardi is hoping to return to contention for the home game against Bournemouth following injury.

Berardi missed Saturday's home draw against Birmingham due to a hamstring strain and if he is fit, head coach Neil Redfearn must decide whether to recall him or stick with Scott Wootton at right-back.

Strikers Billy Sharp and Souleymane Doukara are both pushing for recalls, while Redfearn has the option of bringing Alex Mowatt and Casper Sloth into his midfield.

Leeds, three points above the relegation zone, are chasing their first league win in eight matches.

Bournemouth will wait on the fitness of goalkeeper Artur Boruc ahead of kick-off.

The goalkeeper is a doubt for the Championship clash after suffering a neck injury in the build-up to their 2-0 win at Rotherham on Saturday, a result which saw the Cherries return to the top of the table.

Fellow shot-stopper Ryan Allsop returned from his loan spell with Coventry and could step onto the bench if Boruc cannot feature with Lee Camp deputising once more.

Boss Eddie Howe could keep the faith with the XI that saw off the Millers as they look for their second Yorkshire victory in four days.