Paul To Stick With Leeds

A deal with Villa was on the cards, in a summer move, which would have seen Robinson reunited with old manager David O'Leary for an estimated fee of around Â£3.25 million. Robinson however failed to agree personal terms and vowed not to become another player involved in the Leeds exodus. 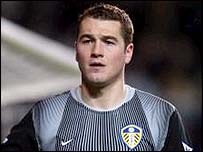 Robinson, who played the full 90 minutes against Burnley yesterday, has been with the Yorkshire club since he was 14 and is in no doubt he made the right choice to stay.
"The speculation can continue for all I'm concerned," said Robinson.

"Leeds have brought me through and I think I owe it to the club and the fans to do my best."