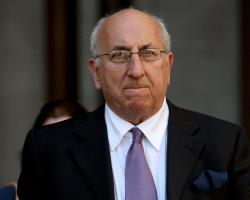 Leeds-based law firm Ford & Warren has filed the petition for unpaid fees - reported to be around £150,000 - on behalf of former club director Melvyn Levi

The case is scheduled to be heard at Leeds Combined Court on January 13.

Bates, 82, sold Leeds to Bahrain-based investment firm Gulf Finance House Capital in December 2012 and the club changed ownership again in April this year when Italian businessman Massimo Cellino completed his takeover. The petition has been served in relation to unpaid court fees

A case involving Levi was struck out in 2012 with the judge in the case ordering that Levi's fees be paid by the club.

Nick Collins, a senior partner at Ford & Warren, told BBC Radio Leeds: "This is not a dispute with Mr Cellino.

"This is something he has inherited from the previous ownership of the club.

"We bear no ill-will towards Mr Cellino and we wish him well.

"I genuinely hope we can resolve this amicably, but we must do what is necessary to protect our client's position."