Although Viduka has intimated that he is unsettled at Elland Road following the departure of a number of players recently, Reid insists that he will expect the Australian to play against Newcastle in United's opening game of the season.

Dispite his displeasure, Viduka has not submitted a formal transfer request, leaving Reid with no cause for concern.

"We've heard nothing official about Mark wanting to leave so he is still very much part of my plans for the season,"Reid told the Yorkshire Evening Post. 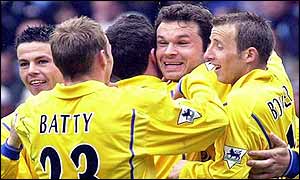 Mark just wants to be loved

A verbal spat between Reid and Viduka briefly interrupted Tuesday’s morning training session, but the disagreement was quickly resolved between the two. Viduka appeared back for the afternoon training session as scheduled.

"Words were said. But disagreements are part and parcel of a manager's job. You just get on with it," added Reid.

Viduka is also supposedly furious that Reid revealed details of a private meeting between the pair when the Leeds boss laid into him at half-time during Sunday's defeat at Burnley.

He told the striker that if he really wanted to go, then he might as well leave now. Viduka felt badly let down by Reid's outburst and did not go out for the second half. The players were shocked by Reid's scathing attack and a source close to the dressing-room said: "Peter Reid had a right go at Mark at half-time, saying that we all know he doesn't want to be here and that, if that's his attitude, he should go now.

"Mark was shocked by that and he said if Peter doesn't want him, then why should he play for him?"

To make matters worse for Leeds, Reid and chairman Professor John McKenzie appear to be on a collision course over the player.

Reid has run out of patience with Viduka and is prepared to cash in on one of the club's few remaining stars.

McKenzie, though, has repeated that he does not want to sell Viduka, whose goals saved Leeds from relegation last season.

Viduka has three years left on his Â£40k-a-week contract and McKenzie said: "As I've said all along I'm committed to keeping Mark at this club."

The striker is expected to start United's friendly game against Hull City tomorrow and continue to lead the line with Alan Smith.