Ridsdale, who quit Leeds in March as their multi-million pound debts spiralled out of control, says he is close to returning to the game.

He was strongly linked with a take-over of ailing second division side Barnsley but failed when his bid was rejected in favour of a rival offer. 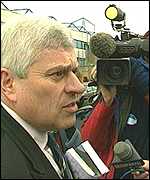 Pete behind a mike

Ridsdale was also said to be interested in a deal to buy debt-ridden Oldham Athletic but again nothing concrete materialised.

Now Ridsdale says he is involved in high-level discussions to make a return to the game and said developments could be imminent.
He refused to name the club involved but said: "Discussions are ongoing and something could happen in the near future.

"I can't say anything more at this stage."

Which is very unlike him!
Did you know?
Rearranging the letters of 'Peter Ridsdale' gives: Dire Leeds Prat!