Andrea Radrizzani in talks to take full control of Leeds 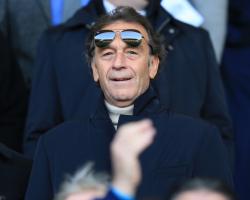 Italian businessman Radrizzani, 42, bought a 50 per cent stake in the Sky Bet Championship club through his company Aser Group Holding in January

Leeds appeared on course for a top-six finish under Garry Monk this campaign, but have slipped out of contention after winning just one of their last seven matches and their significantly inferior goal difference to sixth-placed Fulham means the play-offs are now out of reach